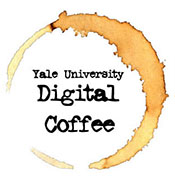 In 2002 then Dean of the School of Art Richard (Chip) Benson convened a group of people from campus and the nearby community to meet and discuss whether Yale could come to a common consensus on Color Profiles and Color Space. It was the early years of digital capture on campus and there were too many variances in technologies on campus so a common standard was never arrived at and the group meetings were ended.

As work went on in the studios, I would meet with some of the various studio heads on campus, largely Matt Shirley and Melissa Fournier and discuss workflow, staffing issues and new equipment. More often than not these meetings occurred over coffee in one of the local coffee houses on campus. Over time word of these causal meetings grew and more people asked to join in discussions to that point that at one such meeting we had a large portion of one such coffee shop occupied by 10-12 people.

In 2009 the idea of a more formal group and meetings was hatched and Digital Coffee was born. Melissa Fournier and myself became the self-appointed leaders with Chris Edwards soon joining in to co-lead the group. Our website was born out of the idea of a shared resource where people on, and off, campus could look and learn more about the various studios on campus, standards and approaches we employ and also post information on various projects we are working on.

As a general rule meetings are held quarterly on campus, last about an hour, and are hosted by one of the participating studios that have meeting space to accommodate larger groups. Each meeting typically begins with an introduction to the group and the topic for that particular meeting. At the end of each meeting we then try to have the various studios on campus give an overview of who they are and the work they are doing. It is an opportunity to share some knowledge and let others know about some of the work happening on campus.

The Digital Coffee group has written up a campus Shared Practices document which helps guide people in the capture and documentation of still images.

If you have an idea or a topic you would like to see presented at a future Digital Coffee meeting please send us a note, we are happy to have broad involvement in the group.