Today the photo studio operates under the umbrella of the Visual Resources department. The Gallery employs two full-time studio photographers and one part-time documentation photographer.

In addition to the photographers, the Visual Resources department employs:

The Yale University Art Gallery began utilizing photographic images of its galleries and collections in the 1930’s. Through varying Yale entities photographic needs were accomplished by contract utilizing some of the people below: 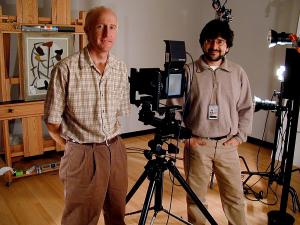 In 1999 The Yale University Art Gallery took the step to create an in-house, all digital, photographic department as part of a two-year grant to photograph highlights from the American Decorative Arts collection. Soon after the department grew and was made a permanent department within the Gallery photographing all of the collections.